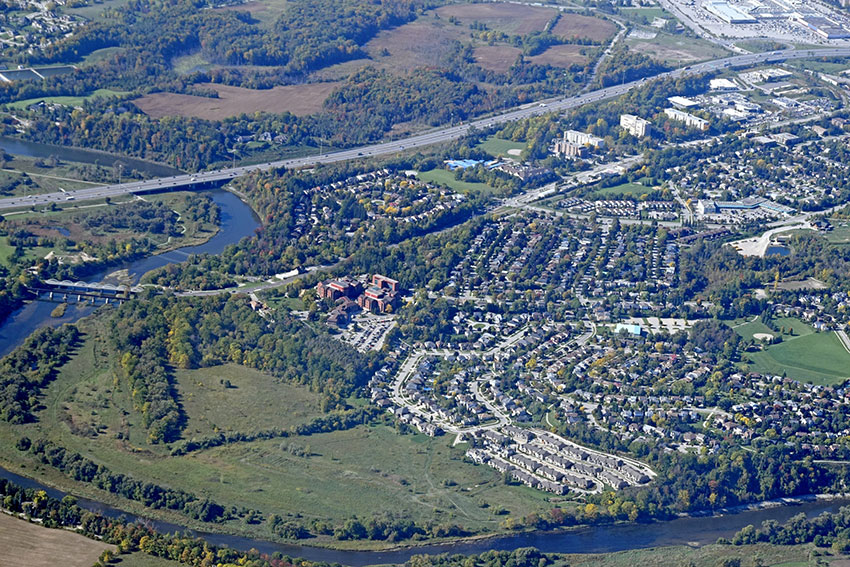 Ironically the smallest city in the contemporary Tri-City area of Southwestern Ontario is the oldest. Mennonite settlers first congregated around the mills of Abraham Erb, in what is now downtown Waterloo. The settlement took the name Waterloo in 1816, to commemorate the defeat of Napoleon the year before. German immigrants soon overtook Mennonites and started another village nearby, called Berlin to recognize their origins. Later, that settlement changed to Kitchener, echoing patriotic sentiment during World War I.

Waterloo and Kitchener now abut. Without signs, a motorist wouldn’t know they were entering another city. For years, the area is known as K-W, or Kitchener-Waterloo, though each community retains its own municipal government. Waterloo’s growth in the last 30 years is strongly tied to technology. Leading the way is RIM, creator of the Blackberry smartphone. Their success built on the two universities already in the city and attracted more tech firms to the area.

How Much is Car Insurance in Waterloo Ontario

The average cost of car insurance in Waterloo is $1,322.

We surveyed the car insurance prices in the city of Waterloo for the purpose of illustrating the range in quotes based on driving record, location, and other criteria. To get a customized quote, enter your postal code above.

The best auto insurance rates come from comparison shopping as well as carefully matching needs to coverage. Every driver in Ontario starts with the minimum mandatory auto insurance policy. All cars must have at least this minimum to use roads in the province. This mandatory coverage is augmented by most drivers. Basic third-party liability coverage doesn’t protect adequately against accident settlements for serious incidents. Ontario retains the right to sue at-fault drivers for damages. Most drivers purchase coverage beyond the $200,000 minimum.

Many motorists don’t realize that collision, as well as comprehensive insurance coverage, are optional. In some cases, agencies loaning money for car purchases might require collision and comprehensive, but there’s no legislative need for these. Since these options assist a driver with the cost of repair and replacement after an accident, most opt for some level of coverage.

Those motorists who add collision and comprehensive endorsements can alter the cost of coverage by adjusting deductible amounts. High deductibles place more financial responsibility on the car owner after an incident. This results in lower premiums while low deductibles cost more. Insurance companies take on increased risk and so they respond with more expensive terms.

Qualifying for discounts reduces the total cost of auto insurance coverage. Each insurance company has its own list of discounts, and not every type may be offered by all insurers. The most common discount type comes from multiple policies held with one company. This could be both home and auto coverage with the same company. Households with more than one car and more than one driver may also realize savings.

Other discounts include milestones, whether it’s reaching a certain age or maintaining consecutive years of claims-free driving. New drivers may receive discounts for successful completion of driver’s education or for maintaining excellent grades in school. Anti-theft and telematics devices may qualify for further discounts.

It’s important to know that most insurance companies only add discounts when requested by the motorist. In a few cases are discounts added automatically upon qualification.

The best way for a motorist to assure paying the lowest premiums is through maintenance of an accident and claims-free driving record. Traffic tickets and previous claims do come off your record, but only slowly over time.

Getting the best rates for car insurance in Waterloo means shopping around, and Ratelab’s car insurance calculator is the best tool to speed your search. Simply enter your home postal code to start a search through over 50 car insurance partner companies.