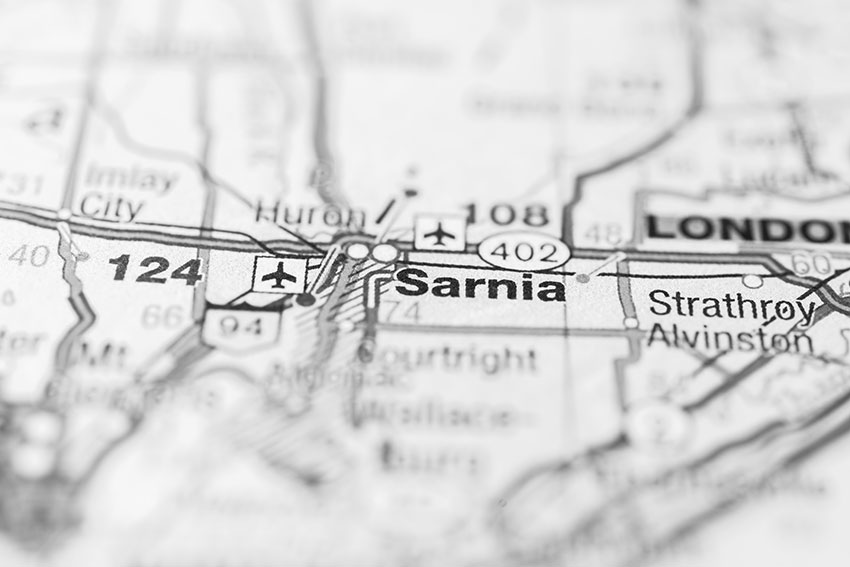 The City of Sarnia, at the southern tip of Lake Huron, represents the dividing point between the upper and lower Great Lakes. With a natural harbor on the St. Clair River, the city’s location provides a sheltered port for ship traffic on the Lakes. The convenience of the harbor led to the development of Sarnia as a petrochemical hotbed, an industry that remains important to the area.

Also at the western end of Highway 402, the Blue Water Bridge is one of the busiest border crossings into the United States. Opened in 1938 and twinned 59 years later, this crossing is second only to the Ambassador Bridge in Detroit in terms of volume. Sarnia is the largest city on Lake Huron, and its position at the western end of Ontario keeps car ownership a priority, with only a few intercity transportation options. On the plus side, residents enjoy low car insurance prices.

How Much Does Car Insurance Cost in Sarnia

The average cost of car insurance in Sarnia is $1,245.

The table below shows the Sarnia car insurance cost for a sample driver.

We surveyed the car insurance prices in the city of Sarnia for the purpose of illustrating the range in quotes based on driving record, location, and other criteria. To get a customized quote, enter your postal code above.

With already low insurance costs, Sarnia drivers can still save money using smart insurance shopping tips. Understanding how the process works in Ontario helps pinpoint where best to spend and where to save. Ontario’s car insurance system, though highly regulated, allows a great deal of flexibility for insurance companies. Seeking a competitive advantage, each company uses its own method to underwrite policies. So while statistics remain the same for each insurer, how these are used differs.

With Ontario home to some of the highest insurance rates in Canada, the government is also attempting to relieve the financial pressure. This results in periodic changes to insurance rules. Understanding what these changes mean saves consumers from being under-protected.

By law, all cars on the road must be registered and insured. Ontario sets a minimum for insurance coverage, as all provinces do. Covering four insurance types, the most important for most drivers are third-party liability and accident benefits insurance.

Third-party liability protects a driver against lawsuits arising from at-fault accidents. Statutory coverage requires $200,000, but this may not be sufficient in the case of serious accidents. Settlements exceeding this amount are common. A driver with only the required provincial minimum remains responsible for amounts in excess of insurance coverage. It’s easy to see why many motorists opt for coverage of $1 million.

Recent changes to statutory accident benefits create a similar problem, though perhaps not one that might affect as many motorists. In June 2016, the Ontario government redefined catastrophic injury and combined the way certain benefits are paid. While in most cases, accident victims aren’t affected by the changes, certain combinations of benefits reduce. Previously, an insurance company was exposed to $2 million when the full payout of these combinations occurred. Now, there is a $1 million cap on the same situation. As with liability coverage, motorists can now purchase additional insurance to restore coverage.

Sarnia Car Insurance Discounts — What You Need to Know

Savvy insurance consumers know that discounts are a great way to shave dollars off car insurance premiums. Not everyone knows how to take advantage of the discount options. Two key points about discounts are that not all insurance companies offer the same discounts, and also that most companies require a driver to request a discount. These won’t apply automatically, even when your insurer knows you qualify.

Insurance companies have many discounts in common. Using winter tires, for example, qualifies you for a discount with many insurers. Other discounts, such as usage-based insurance plans using smartphones or telematic devices, feature with only a few insurers.

The key to maximizing the potential for auto insurance discounts is communicating with your company, agent, or broker. Ask what’s available, what you need to do to qualify, and, when you do, have the discount applied to your policy. Check for new discounts and qualifications at least annually.

Sarnia drivers can use Ratelab’s car insurance calculator to find the lowest prices on the auto insurance policy best for them. Simply enter your home postal code below to start.