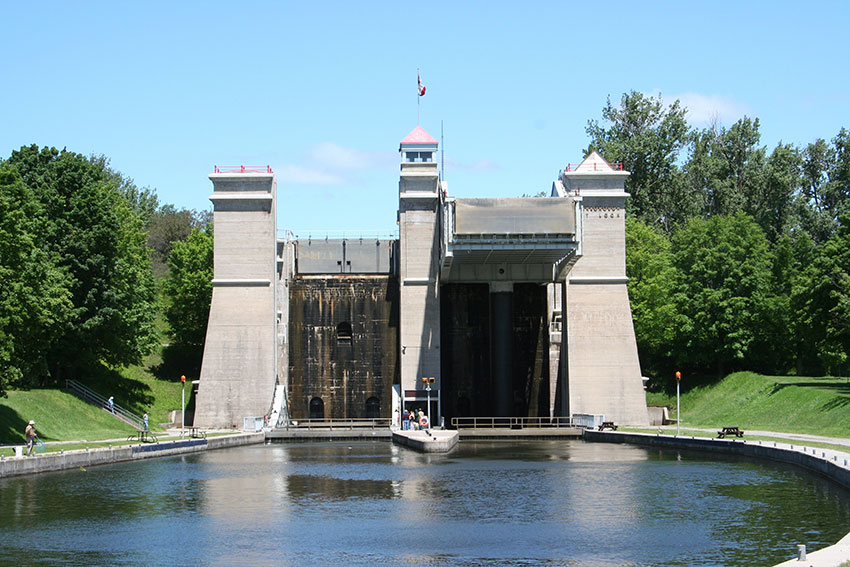 Water and Peterborough have an intimate connection that dates back before the young town’s incorporation. Water-driven mills built at the current day site of Millennium Park formed the basis of both the settlement and economy in the area on the banks of the Otonabee River. In 1825, over 2,000 people in nine ships crossed the Atlantic from Ireland. Poor and with few prospects in their native country, each family and single man was chosen by Peter Robinson, businessman, and member of the legislative assembly of Upper Canada. These Irish settlers followed Robinson to the site of contemporary Peterborough, then called Scott’s Plains. The town was renamed in Robinson’s honor.

The trip to Peterborough is much easier today. Though it’s outside of the GTA, Golden Horseshoe, or any built-up industrial area, it’s a modern and full-featured city. Situated south of the Kawartha Highlands, the city serves as a gateway to parts of Eastern Ontario’s cottage country. Due to its rather isolated location for a city of about 80,000, car ownership is common for its citizens.

How Much Does Car Insurance Cost in Peterborough

The average cost of car insurance in Peterborough is $1,044.

We surveyed the car insurance prices in the city of Peterborough for the purpose of illustrating the range in quotes based on driving record, location, and other criteria. To get a customized quote, enter your postal code above.

Ontario’s car insurance market is based on private providers and a competitive model. While the province regulates the insurance industry, each company creates its own underwriting rules. Because of this, drivers may find rates vary largely, depending on which company quotes on their policy.

All policies start with mandatory coverage, required for all vehicles in the province. This minimum policy has options and extensions added to suit individual needs. Commonly, motorists add additional third-party liability coverage, since the provincial requirement may not be enough to protect a driver in case of a lawsuit. Similarly, but less frequently, drivers add additional coverage to statutory accident benefits. This portion pays for medical treatment and rehabilitation costs not covered by the provincial health plan. Subject to revisions that took effect in June 2016, look for accident benefit top-ups rising in popularity.

Optional auto insurance coverage most frequently takes the form of collision and comprehensive policy endorsements. These remove the burden of paying for damage or loss to the vehicle because of an insurable incident. The driver pays only the deductible portion of costs and the insurance company pays the rest. A motorist adjusts the cost of the policy by adjusting the amount of the deductible. Lower deductibles mean higher insurance rates, while higher deductibles lower costs.

Additional options add protection for specific conditions, such as extending car insurance to rented vehicles. While these add costs to a policy, insurers often bundle popular options together in a reduced rate package.

List of Insurance Companies and Brokers in Peterborough Ontario

Peterborough drivers can use Ratelab’s car insurance calculator to find the lowest cost car insurance coverage for their driving needs. Enter your home postal code to start the process. In just a few minutes, Ratelab searches dozens of industry partners to match your needs with the lowest cost quotes. Try it now and start saving today!