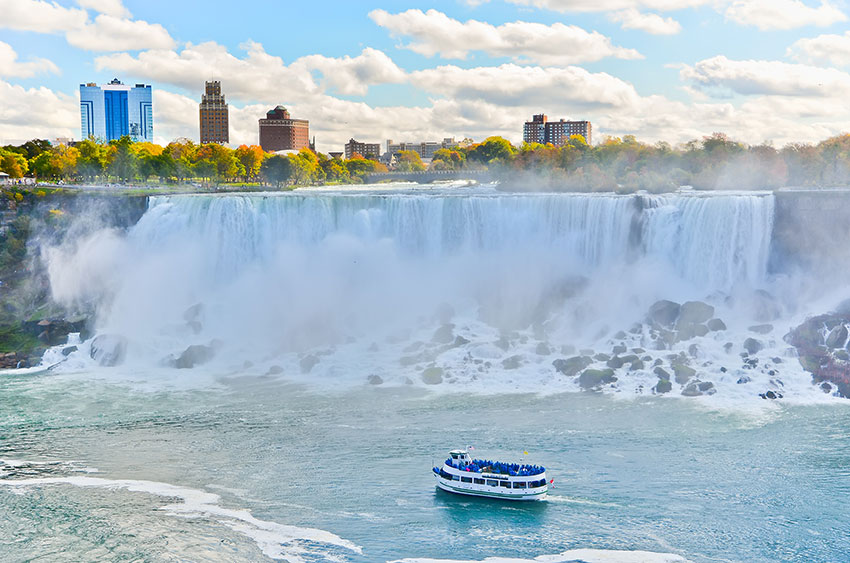 Niagara Falls is more than just a beautiful natural wonder. It’s become a go-to tourist destination connected with romantic getaways and honeymoons. In the middle 1800s, driven by artists’ depictions of the three cataracts tumbling over the Niagara Escarpment, visitors started touring the area to see the Falls and, increasingly, to spend time in the region.

Today, the Ontario city remains a popular, if gaudy, mecca for tourists. Most visitors arrive by car or tour bus. While the town has a railway station and passenger service through VIA Rail, it’s not widely used by tourists. The city itself is home to over 82,000 people, but its metro area accounts for almost 400,000 residents.

How Much Does Car Insurance Cost in Niagara Falls

The average cost of car insurance in Niagara Falls is $1,351.

We surveyed the car insurance prices in Niagara Falls for the purpose of illustrating the range in quotes based on driving record, location, and other criteria. To get a customized quote, enter your postal code above.

Under the insurance system in Ontario, only a basic amount of insurance is mandatory, but all cars in the province must carry it. Most motorists opt for more coverage since the cost of accident settlements can exceed the mandatory amounts of coverage. Private companies supply auto insurance, usually through agents or brokers.

Extended coverage beyond provincial minimums is easy to add and additional options can further customize auto insurance policies. Each addition increases costs, but many companies bundle popular services which may offer savings over adding features individually.

Cutting insurance costs doesn’t mean reducing protection across the board. For example, both comprehensive and collision coverage are optional in Ontario. A driver willing to assume the financial risk of repairing or replacing a vehicle could save money monthly by declining coverage. This may be practical for drivers with older, low-book value cars. Those driving newer vehicles purchased with financing may be bound to carry full coverage by their lenders.

Residents of Niagara Falls Ontario can take advantage of Ratelab’s car insurance calculator by entering the home postal codes below. Ratelab guides you through the rest of the process and generates up to ten quotes. Provided quotes represent the best prices for the most appropriate auto insurance coverage.