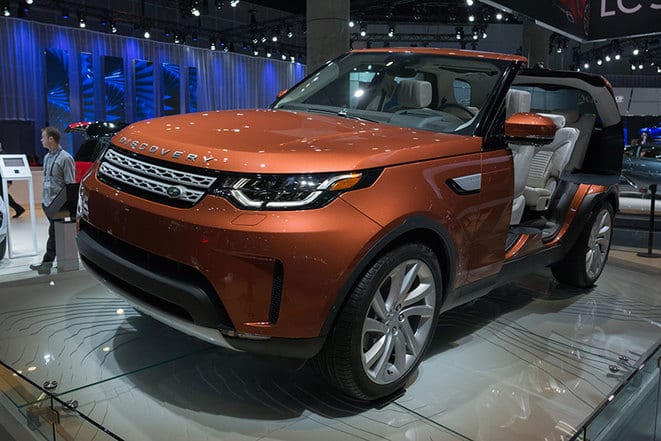 How Much Does Car Insurance Cost For Land Rover

The table below shows the Land Rover car insurance cost for a sample driver.

Land Rover’s lineup of SUVs and crossovers belongs to a vehicle class that’s traditionally insurance friendly. Given that families find these models practical alternatives to the more typically suburban minivan, it’s natural that higher-income earners within the family demographic look to the premium Land Rover brand. Of the models in the company’s 2016 lineup, the lowest base cost exceeds $40,000 while the highest, for the Range Rover, nearly tops $110,000. These are luxury SUVs and crossovers, to be sure.

It’s typical that the materials and construction techniques used in luxury car manufacture lead to substantial vehicles that protect both drivers and passengers well in the case of an accident. In addition, with budget concerns taking a back seat, leading-edge safety systems frequently feature. Both these factors are true for Land Rover models.

Insurance companies rely heavily on statistical data to determine risks for individual car models. The Insurance Bureau of Canada collects data based on actual insurance claims in Canada and sorts these in a variety of ways. Using this data, insurers have a factual basis upon which to calculate how models perform in real-world situations. When it comes to occupant protection, the IBC rates the frequency of accident benefits claims, and each model compares to the national average. Good performance shows through fewer than average claims, meaning fewer personal injuries resulting from accidents.

Land Rover vehicles show a consistently better than average level of accident benefits claims. Occupants of their vehicles are less likely to be injured in an accident, or Land Rover vehicles as a group are less likely involved in accidents. Either condition means that accident benefit claims performance presents a strong factor that reduces car insurance costs, particularly on the basic statutory car insurance required by the province.

The good news on accident performance comes at a cost. When Land Rover models require repairs after an accident, those repairs will cost more than average. The IBC reports collision claims as a relative index of all claims. The median is 100 percent, representing the average collision repair cost. Each vehicle is then compared to that mid-point. Cars that cost less than 100 percent generally cost less to cover with collision insurance, while those above 100 percent cost more. The range from 80 to 120 reports is average in the IBC data. Above and below are negative and positive performance respectively.

Luxury cars usually have higher repair costs, since premium components and the relative rarity of models mean that both parts and repair techniques are more expensive. Land Rover vehicles typically follow this pattern. In the most recent IBC data, only 2005, 2006, and 2008 models of the LR3 fall into the average range for collision claims costs. All other models and years are placed in the highest cost category. The 2013 Range Rover Sport tops the scales at 251 percent of an average collision claim.

Comprehensive insurance coverage measures the same way in IBC data. The 2012 LR2 and 2008 LR3 models place in the average range for comprehensive claims. Otherwise, Land Rover models included in the IBC data cost more to settle. In some cases, these cost much more, such as the Range Rover Sport from 2006, at 586 percent of average, or the Range Rover four-door from 2006 at 424 percent. Note that only a few Land Rover models appear in the IBC data since there must be at least 1,500 insured vehicles before a model enters the statistics.

While occupant protection produces a favorable insurance risk rating for Land Rover models, high collision and comprehensive repair costs push those parts of the policy up.

In Ontario, collision and comprehensive coverage aren’t required to legally operate a vehicle. While it probably doesn’t make sense to leave a $100,000 vehicle without this coverage, it doesn’t affect the driveability of a car from an insurance standpoint.

There are other ways to moderate the costs of these endorsements, and thus the total cost of your insurance policy. The most common way is through adjustments to the deductible amount. In a collision or comprehensive claim, there’s often an amount that the insured driver contributes to repairs or replacement before the insurer kicks in. For a driver who can afford a higher contribution after an unexpected incident, high deductibles keep monthly insurance costs down. Conversely, a motorist who wants the insurance company to take care of more of the costs can lower deductibles. This increases the monthly or annual premium for the policy. It’s a way to personalize and fine-tune coverage to match the owner and vehicle.