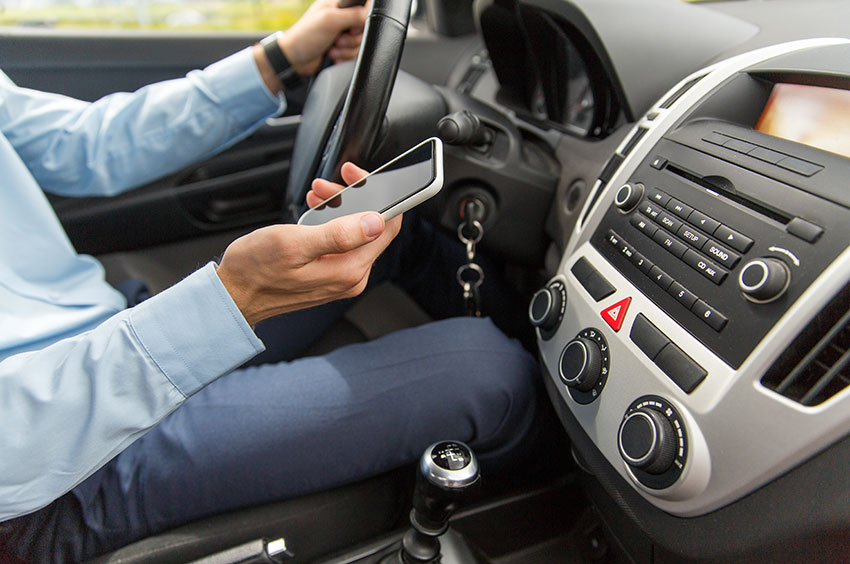 Home • Driver's Resources • Distracted Driving in Ontario
Contents Show
1 The Distracted Driving Law In Ontario
2 Are Hands-Free Devices Allowed While Driving in Ontario
3 Am I Allowed to Use My Phone When At A Stop Light?
4 Are You Allowed to Eat And Drive In Ontario?
5 Is It Legal To Wear Headphones While Driving In Ontario?
6 Details Of Penalties Or Fines For Offenders Of Distracted Driving Law In Ontario
7 Ontario Distracted Driving Statistics
8 Statistics for Young or Novice Drivers
9 About the Author: Valerie D. Hahn
10 Leave A Comment Cancel reply
10.1 Continue Reading
10.2 Related Posts
10.2.1 List of Top Electric Cars & SUVs in Canada 2023 – 2024
10.2.2 Top 7 Best Electric Trucks Coming to Canada in 2023 – 2024
10.2.3 Is a Pressure Washer Safe for Your Car?
10.2.4 The Danger of Driving on Plugged Tires

There could be many causes that interrupt a driver’s attention on the road when behind the wheel. While some may try to touch upon their makeup, others may try to open up a pack of chips to munch on. Or, there is a comment on your Facebook timeline that you really want to explore on your smartphone. These are just a few examples of antics that may need the driver to shift the focus away from driving.

One of the major distractions that drivers have to now avoid is using electronic items such as cell phones or other handheld devices. Eyes on the road and hands on the wheel with full attention to driving are safest for all road users. The issue of distracted driving has assumed such a huge proportion that there are many Canadian provinces that are enforcing a ban as per law. Ontario is one of the provinces where distracted driving is strictly prohibited.

The Distracted Driving Law In Ontario

Since 2009, the traffic law in Ontario has banned the use of handheld devices except to use 911 emergency services. The distracted driving law in Ontario has enforced the ban of operating any kind of handheld devices while driving. These also include electronic devices used for communication or entertainment purposes. It is also prohibited to view any display screens while driving if not related to a driving mechanism.  A few examples of banned devices are:

Are Hands-Free Devices Allowed While Driving in Ontario

As per law, you are allowed to operate a device while driving as long as you don’t hold, manipulate or touch it. These hands-free devices may include speaker phones, a dashboard system, or an earpiece. You may deactivate or activate the device and that could be done before you start driving or after you reach your destination. So, while driving, you may not scroll through the device as this is highly distractive.

The use of a hands-free device while driving is not considered perfectly safe.  If a driver is using a blue tooth device for communication, there is bound to be a shift of focus from driving to the conversation when on a call. Hands-free devices do allow drivers to keep their hands on the steering wheel but the distraction to the mind is only reduced not totally avoided. As per an infographic survey, the National Safety Council Mission noted that about 9% of the drivers talk on phones while driving. Around 26% of the collisions involved distracted cell phone usage including hands-free devices.

Am I Allowed to Use My Phone When At A Stop Light?

It is not allowed as per law to use a hand-held device even when at a stop light. The logic behind this rule is that a collision could also happen when a driver is distracted while at a stop position. At a stoplight, when a driver uses the cell phone, it is very likely to miss the turn signals and light changes. This could prove hazardous on the road. The driver may also miss any advancing cyclists or pedestrians when distracted from driving and this could prove unsafe for all road users.

The only exception to this could be if the driver has to call the police, emergency medical services, or the fire department. Nonetheless, a driver may have to park the vehicle in a legal manner and must pull out of the roadway. This has to be done without blocking traffic to use a hand-held device. This action may not be safe while driving on a series 400 highway. Hence drivers are not allowed to pull off and park on the highways except for emergency conditions. Another option is to drive over to the nearest service station or exit out of the freeway traffic only when at the next interchange.

Are You Allowed to Eat And Drive In Ontario?

Well, the distracted driving law in Ontario has banned the use of hand-held devices since October 2009. However, Bob Nichols, spokesperson for Ontario Ministry of Transportation has mentioned that “a driver who eats while driving may get a ticket as it endangers the safety of other road users”. He further added that “if a driver is convicted in a collision and was found to be eating while driving, that may attract a penalty of up to $2,000 and may also get jail time up to 6 months and 6 demerit points on the license. Based on nature of damage caused by the infraction, the driver license could get suspended for up to 2 years”. The Canadian Council of Motor Transportation Administrators has agreed that eating or drinking could be reasons for distracted driving.

Is It Legal To Wear Headphones While Driving In Ontario?

As per law in Ontario, it is legal to wear headphones while driving as they are still considered a hands-free device. The Ministry of Transportation has not specifically banned the use of headphones. However, it is also to be noted that the move-over law for emergency vehicles requires the drivers to be able to hear the sirens and get out of their way in a safe manner. The use of headphones may not allow the driver to be attentive while driving to a great extent. Especially, with loud audio blasting in the ears through headphones.

So, in the event of a collision, if the driver was found to be using headphones, it may be a concern. Any obstruction of warning traffic sounds that lead to the collision could have negative results on the claim outcome.  Maybe, Ontario could consider adopting a rule of allowing only one earpiece while driving as it is in British Columbia. This would allow the driver to listen to surrounding road traffic and alerts with the other ear.

In 2015, Ontario increased fines for distracted driving. Some critics suggest these rates are still too low to effectively deter offenders. If a fully licensed or hybrid driver holding a Class A to G is convicted of distracted driving then the following penalties may apply:

A new driver may not get demerit points for distracted driving. But on conviction, a novice driver may have to face the following sanctions:

Novice drivers may get convicted under 2 charges for distracted driving. These include criminal charges for dangerous driving and under Highway Traffic Act for careless driving. So, fines could be for $2,000, 6 demerit points, jail time of 6 months to 5 years, and suspension of license for up to 2 years.

As with texting, distracted driving could also occur from talking with other passengers, eating and drinking, using maps, etc. None of these other activities are banned, but none combine the dangers of cell phone use. In Ontario, it’s now illegal to even hold a phone while driving a vehicle. Text messaging requires cognitive, visual and manual attention away from driving tasks. Even hands-free phone or in-car conversations can reduce a driver’s ability to process visual details about the traffic around them.

The Ontario Provincial Police released distracted driver data for the first half of 2016. Since 2013, distracted drivers have caused more deaths than impaired drivers in Ontario. Also, impaired driving resulted in 19 deaths compared to 38 due to inattention in driving. Even so, at these projected 2016 rates, one Ontarian in every 10,000 dies due to a driver’s distraction. In comparison, 5 people in 10,000 died as a result of distracted driving in the United States in 2014, the last year for which official figures are released.

Smartphone usage is still on the rise, and the demographics show greatest increases for the mature age group. It’s not known yet if this statistic correlates to greater distracted driving numbers for the older population.

Studies show that a driver’s eyes are off the road for 5 seconds each time they look away to a cell phone to read or send a text message. Their car travels about 100 yards in that time at highway speeds, or about the length of a football field. It takes more time to process changing conditions when returning eyes to the road and to react.

Statistics for Young or Novice Drivers

When we look at the statistics for new drivers the numbers are alarming too. While not limited to them, the distraction problem is greater with young drivers. As per data about 10 percent of all fatal accidents involving drivers under the age of 19 resulted from distracted driving. Drivers in the age group of around 20s comprise about 23 percent of the drivers involved in fatal accidents. But, when we looked at data for fatal crashes involving cell phone distraction, that number shoots to about 38 percent.