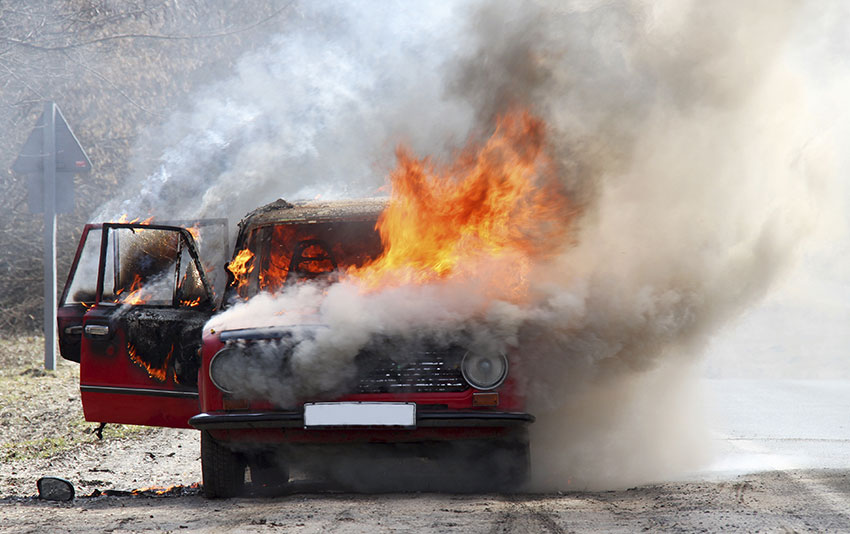 Home • Car Insurance Resources • Will My Auto Insurance Cover Fire Damage
Contents Show
1 Is A Car Fire Covered By Insurance In Canada
2 Top 10 Causes Of Car Fires
3 Can Car Catch On Fire From Overheating
4 How Many Car Fires Are There Each Year In Canada
5 How To Prevent A Car Fire
6 What To Do When Your Car Catches Fire While Driving
7 About the Author: Valerie D. Hahn
8 Leave A Comment Cancel reply
8.1 Continue Reading
8.2 Related Posts
8.2.1 Car Insurance for New Drivers in Ontario
8.2.2 Are Car Insurance Rates Negotiable?
8.2.3 Is Car Insurance Subject to HST?
8.2.4 Do Car Insurance Companies Share Information?

Car fires are a costly and scary affair; they could lead to the total loss of your car and even fatalities. Such a loss would be devastating and very stressful if you do not have enough coverage. When you ensure that your car has the right coverage then you may not worry. You may get peace of mind only when you choose wisely when you sign up for a policy. It is important to know what is in your insurance policy before your car catches fire.

Is A Car Fire Covered By Insurance In Canada

However, if your neighbor has a fire that spread to your compound and burns your car then you may claim under the liability coverage of your neighbor.

The following list compiles some of the common causes of car fires:

Can Car Catch On Fire From Overheating

It is possible for a car to catch fire due to overheating of any of its components, especially the engine. An overheating of the engine may easily cause a spark that could flare up a fire. When this comes in contact with flammable fluids then that could double the effect. Any oil or fuel spill that lands on an overheated exhaust may cause a fire. It is very important to keep a check on the temperature gauge and it is on your car dashboard for a purpose. Any wires that disconnect in the engine could drive up the engine temperature and the overheating may cause a fire.

How Many Car Fires Are There Each Year In Canada

The (OFMEM) Office of the Fire Marshal and Emergency Management maintains data from fire reports based on each fire call all over Canada. They record and group this data in terms of ignition sources, location, occupancy, fatalities, injuries, etc. This data covers all provinces and municipalities. As per OFMEM, there were 55108 fire losses reported during the period from 2011 to 2015, and out of the 27 percent were vehicle fires.

How To Prevent A Car Fire

“Prevention is better than cure”, even in the case of a car fire as it could easily lead to drastic results such as bodily injury and loss of life or property. You may prevent a car fire by following the below tips, it could save a huge mishap.

What To Do When Your Car Catches Fire While Driving

First of all, when you notice that you are driving and your car has caught fire, don’t panic. Act sensibly, do not step up the gas and rush to your destination. Try to stop your car at a safe spot as soon as possible and switch off the engine. Get everyone out of the car and far away as fast as possible, at least 150 ft away. If you try to extinguish the fire you may ensure that you are using a Class B or Class C. But it is best to not do anything on your own as it could be too dangerous. You may call 911 for the fire brigade and get their help to douse the fire.